Jack stood in front of the large board that was filled with diagrams, charts, dates, times and, of course, naughty little drawings made by the Elves. Biting the corner of his lip, frustration settling after many hours, he knew that he had to create a plan or else. Turning his head, ever so slightly, he could hear them, behind him, sniggering away as they always did. He didn't really care what they were doing as long as they managed to get the job done. 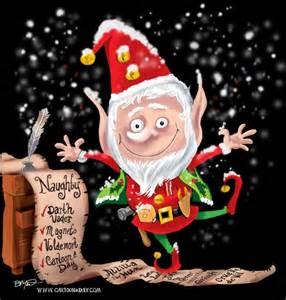 Turning quickly, much to the startled gaze of the Elves, he looked each of them in the eyes to ensure he had their full attention. They, after all, did not want to annoy Jack. Not because he was mean, or angry, but because they respected him and all that he stood for. With a grin of intent, Jack summoned his strength and started to explain, “Right, you sorry lot, there’s a job to do and I want you to help!  I want three groups of two.” Jack stood still, listening to silence for ten seconds, with nothing moving within the room. Not even an inch. “You can be naughty!”  The room suddenly became a torrent of activity with Elf climbing over Elf until three sets of Elves stood to attention.

Looking each of them up and down, noticing their lob sided hats, snot covered noses and general, ‘dragged through a hedge backwards’ tardy condition, Jack knew that his mission might not actually happen. But, after thinking, and despite their naughty nature, they did manage to get things done when it was in their best interests. As the other remaining Elves composed themselves, managing to sit down on the benches behind the six at the front, Jack started to tell them all about their mission.

“You six will be responsible for three tasks, one task each, to ensure that we get snow this year which,” he stopped for a brief second as two of the Elves started to yawn, “ensures that all of you can go sledging!” The yawns vanished as they realised that they’d actually get to do something they really liked. Chaos usually spread across the valley, at the thought of such an event, but Jack had to ensure that they stayed on track. They were naughty, mischievous like no other, but once something had their interest they would complete that task like nothing else existed.

Knowing that he now had their full attention he started to list the tasks to a captive audience, “Task one would be to collect a fleck from a Reindeer’s hoof. Task two would be to gather a strand of hair from a white Bunnies’ nose and task 3, being the hardest, would be to gather half a cup of snot from a Polar Bear’s nose!”  Before Jack had even finished the six Elves ran from the room, slamming the door with an almighty crash as the last Elf vanished.

Looking sad, the remaining Elves sat looking at Jack and, as he reflected on his decision to involve them again, especially after last year’s disaster, he actually would have liked to have included all of them. But, as Father Christmas once said, a great big bunch of Elves roaming the snow covered land could only mean one thing… absolute destruction of everything sane and good. Being naughty, after all, did seem to be what they were second best at. Jack smiled as he recalled what they were best at, “I have a question for the remaining Elves,” he stated, as they all stopped what they were doing, looking over to Jack, “who wants to wrap some presents?” The cheers filled the room as the Elves, once again, climbed over each other towards the door that lead to the presents. Jack shook his head but carried on smiling.

He, after all, wanted this Christmas to be special but only for good Boys, Girls, adults and Elves alike.

Next: A Reindeer’s Dance
Posted by Damian Jones at 14:15