Daniel sat, perfectly still, on the subway seating, waiting patiently. He’d not felt this way for quite some time but right now, this very second, he could feel his heart bounce around in his chest. He did think that his affection was something of silly dreams but, as the world had not yet damaged his ideals, to some it could be called innocence at work. Either way, no matter what was going on within him, it was a beautiful event. 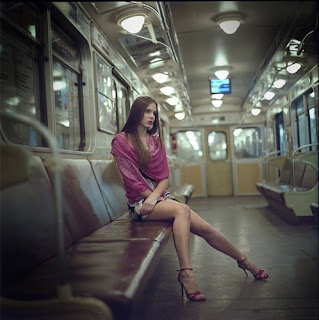 He’d been travelling, from this very line, for a couple of years and although he could have driven to work, he’d decided to simply take it easy. A bright idea, an easy option, quickly taken and here he was.

He stopped his leg bouncing up and down, trying to fight the nervous energy, but he simply couldn't help himself. She was about to arrive any second and, before she arrived, he recalled the first time he’d seen her. It was a normal day, a day like any other day, but as soon as his eyes settled upon her smile his world changed. In an instant, a very second, her smile improved his world.

She was slightly smaller than him, beautiful hair, eyes that could melt his gaze and that smile, that very smile, took his breath away. She was, to him, perfect and today was the very day that he would say hello. He’d often chastised himself for not saying hello over the weeks and months, but this was an almighty step that couldn't be taken lightly. He was, after all, not used to liking anyone. His friends had laughed at him, in a fun way, saying words such as ‘puppy love’ and although they might have been right, they’d also found it beautiful. He really was so innocent in the world.

He was also scared. Scared of rejection, the simple idea of his affection not being what she would like, but accepted that this could always be a possibility. He’d worked himself up, forcing himself to be brave, so the moment today would be just that, brave. He’d thought about what he’d say at least a hundred times, maybe more, with various silly things being sent his way through the friends mentioned above, but realistically he’d start with a very, very simple little word… ‘hello’.

He again stopped his leg moving up and down as, right then, she appeared from around the corner. His heart stopped, beat faster, stopped again, jumped a little and then melted. She was so beautiful that he could hardly bare to take his eyes away from her. This was something pure, gentle, young and honest. The way things should be, could be, if the world didn't decide to be what it truly was.

She walked past three empty benches, until sitting at the end of his bench. He’d often found that odd but, obviously, wasn't going to complain. He’d smiled at her, once or twice, but being unbelievably shy didn't help matters. This was it, the moment had arrived, and it was now or never as he was away on holiday for the next four days.

He cleared his throat, felt the nervous energy try to stop him, but he absolutely had to say something or forever be caught in an endless loop of silly emotion and fear. “Hello,” he blurted, quickly calming himself before the next word arrived, “I hope the train is on time today!” He looked around as she said nothing, nothing at all. Confused, his fear rising, thoughts crashing within his mind and heart. Maybe she was shy, even more than him, or did she simply not want to know him? The questions arrived quickly but, before he found answers, the train arrived. She stood, looked at Daniel, smiled and nodded before stepping forward as the train slowed.

He sank into the bench, absolutely destroyed that his attempt had failed completely.  As he watched the train door close, he caught sight of her friend, making gestures and then it hit him. Sign language. She was deaf, possibly. Probably. After the weeks and months, he’d actually never once noticed. He couldn't believe that he’d missed something so simple, so obvious, yet… he was oblivious.  More thoughts struck him. The revelation realising within his mind and heart. ‘It didn't matter and why should it?’ he reminded himself. It didn't change a thing.

The four days vanished quickly and, once again, he sat on the bench waiting. His fear had virtually vanished, the beauty of her smile being the constant reminder that he, as well as the world, could adapt to anything. Once again, just like any other working day, she arrived, walking past the same benches as she’d done for months. Sitting calmly, she glanced across at Daniel, a cute friendly smile and, before she looked away, he raised his hand. He’d only had four days to learn, to study, but this was now or never.

He had a few sign words memorised, as he’d done his research, but first pointed at his lips. She nodded. He smiled and, instantly, so did she. She could lip read and, trying to remain calm as his heart once again caused trouble, he started to speak as clearly as he could without any stuttering or slang, “I would really like to have a coffee with you, if you drink coffee, especially seeing as we’re bench friends. Would that be okay?” Her smile absolutely glowed, as she brushed aside her hair. She quickly rummaged through her bag, finding her phone, pointing and then pointing at Daniel.

Within moments they’d exchanged phone numbers and, as the seconds flew and the train arrived, she stood clicking send. Daniel watched as she literally jumped from the ground in excitement, her eyes lighting his entire world, as she waved goodbye and walked onto the train. As the train pulled away he opened the text and read the words she’d sent, ‘Thank you for asking and I really would like to get a coffee. I've sat next to you for months hoping that you’d ask. I'm obviously a bit shy. Can’t wait to see you again, Isabella xx’.

His mind relaxed, the almighty task completed, his heart racing, his body feeling alive and the smile, his smile, couldn’t be compared. He knew that there might be challenges but he wasn’t that silly to believe that love, communication, resided in the hearing of words. He knew that his meaning could be felt through his actions, his eyes, his smile and his warmth. He knew, possibly, that his greatest adventure was about to begin.