Jack ran. He ran as fast as his little legs could carry him despite not knowing where he would run to. The Teddy, clenched tightly to his side, jolted around as Jack cried the tiny tears of life that he should not be experiencing. He was far too young, this was all far too soon, but life nonetheless.  When he heard the news, he didn't know how to feel, let alone think, which left the very last option and that was to run. To hide. To cry like all little boys did when upset. 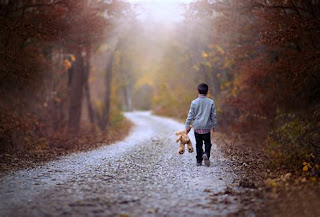 His legs surrendered to exhaustion and he stopped, looking up the long driveway that featured tress to each side of the road ahead. The gravel and stone under his feet, felt strange, despite walking here many, many times. Everything felt strange. Even the rain, pouring around him. He held the teddy to his chest and cried as hard as he could. Eyes closed, tears falling, he held the Teddy so damn tight that nothing in the entire world could separate them. Not even his Mother.

From behind his Father walked towards him. Slowly, his own anguish threatening to tear him apart. Simon knew that he had to be strong, or at least stronger, than his emotions would currently allow. It was time for understanding, tears, hugs and more. This situation, despite his adult years, felt completely new. This wasn't the same as when his Mother and Father left the world, as he had his support platform to recover from, his Son’s hand to hold, his Wife’s lips to kiss and now, he felt as if the entire world wanted to suffocate the life from his very soul.

He’d heard the news the day before, when Jack was staying with his Auntie. Sudden, confusing, the disbelief quickly trying to recover his sanity as the biggest part of his world vanished in the blink of an eye. This was life. This would now be his life. Despite the news, ignoring the pain, his second thought after the disbelief was Jack. He simply did not know what to say, how to say it, or even when to say the words.

Jack had arrived home the next day, slightly earlier than usual, but that was sensible as they both had to be brave. He had a feeling that Jack would even be braver than him, the Father in all of this, but time would tell. He’d tried to use soft words, sensible words, but that only elicited the event right now. He didn't want to stop Jack expressing his feelings, as young as he was, but it only made it harder.

Kneeling in front of Jack, Simon lifted Jack’s chin to see a small face covered in tears. Red eyes, a snotty nose, with new tears arriving as the seconds ticked. The rain was cold, as harsh as rain could be, but that was ignored completely. “Mummy has gone to a beautiful place, Jack,” said Simon with his pain disguised within his softest voice and words, “a place where she’ll always be able to help you when you say her name!”
“Mummy!” said Jack with his broken voice, interrupted with his crying.
“I know, I know Son”
“I want Mummy back!”
“So do I Jack, So do I!”

Simon, placing his other knee on the floor, held out his arms and hugged Jack as tightly as he could with the Teddy squashed between them. Letting go, he held each of Jack’s hands in his, “See your hands Jack, these hands were made when Mummy and Daddy held hands, on a beautiful day. Each time you look at your hands, remember, that your hands are Mummy’s hands. They’re Daddy’s hands. When you see your hands always remember, “ Simon paused for a second as his own tears appeared, then continued, “…that we’re thinking of you, protecting you, wishing for you to smile.”

Simon stood, scooping Jack into his arms as the Teddy fell to the ground, stepping towards the house. “Teddy!” said Jack. Simon turned his head slightly, caught sight of the Teddy on the ground, stepped back and bent over. Jack grabbed the Teddy and held it against his chest again.
“There you go Jack. Keep Teddy safe. Can you do that? Teddy will miss Mummy just as much as we will!”
Jack nodded, kissing the top of the Teddy’s head and, for the smallest of seconds, Jack managed to smile. Simon knew that the next few months would be tough, filled with tears, but maybe, just maybe, Teddy would keep them both safe and, hopefully, the three of them would be okay.