She opened the brightly coloured box, excited, happy with her decision to finally change her ancient phone. She’d be informed that the difference would be amazing, fantastic, despite not really needing such new tech other than to message and send smile filled emoticons. It was time, she knew, seeing as the battery in her old model no longer lasted more than five hours. 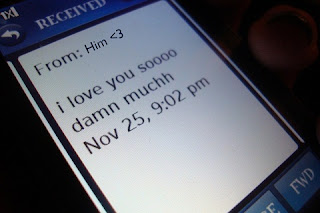 She quickly viewed the instructions, placing them back into the box, keeping everything where it should be in the event that she later sold the phone. Pressing the small pin into the side of the phone, the tiny tray appeared and gently, she placed the sim and memory card inside. A few seconds later, after admiring the large screen, she held the power button. After a few seconds, she wondered if it wasn't working or needed a charge. Just as the doubt appeared, the vibrating part of the phone signalled that everything was perfectly fine. The screen lit, the logo appeared and then, she was all good to go.

Changing the date, then the time, her finger hovered over the last question. She could configure the phone as a new phone or, as a backup had been found, she could simply restore to that. Normally she wouldn't bother but, on this occasion, it seemed sensible to restore. She’d actually prefer to do that, instead of installing all of her random apps, that she wasn't sure that she needed.

She smiled at the amount of times she’d switched off the notifications. Each day, after an update, she’d have to slowly hunt the silly options that seemed to taunt her peace and quiet. If she could have a phone without the struggle, she’d certainly buy that model.

The restore finished, the screen turning black, with that ever-familiar logo appearing once again. Finally, with seemingly little effort, or annoyance, she was ready to log into her favourite social media. She flicked the settings menu into view, pressing the usual wireless notifier, logging into the access point just across from where she was sitting. Already, just by opening a few menus, it did seem so much faster. This was, of course, before she knew that there would be many, many updates to install.

Once connected, the carrier also appearing, she noticed a text arriving. A smile appeared across her face, knowing that it was probably one of her friends that still used such a service. She pressed the sms icon, opening the text messages. Her eyes opened a little wider, realising that she’d not only restored her apps, but many, many text messages. She scrolled, the threads filling three screens worth of space. She’d actually forgotten most of them, time ensuring that memories faded.

Scrolling back to the top, just under the first screen, she stopped and saw his name. That name. It had been four years since she’d spoken with him, let alone texted. He was one of the few that she let go. That person that she should have kept but decided not to do so. She pressed the text and the thread appeared on the screen. He was lovely, charming, despite the situation never quite happening. She wasn't ready, wasn't aware enough, at that time, of what she could have had. As her thoughts flew through her mind, slowly scrolling whilst reading a few of the messages, she could see his calm demeanour trying to work through the misunderstandings.

She knew, even back then, that texting and email was never the best medium for romantic involvement. Far too easy for miss-communication. Far too quick to judge and select words to find issue with. As she read, she could feel her anger all the years previous, towards him, for nothing more than trying to show her that he cared. At that point in her life she was weary, tired, expecting every single man to ask for the same thing, to say the same words. He was different, gentle, yet honest.  The qualities that she, now, knew that she wanted. Needed. Desired after all of the tired and lame messages from men. He was genuine but, at that point, all she could see was another man doing what they did.

She shook her head, knowing that she’d thankfully changed to see things a little differently. She pressed the back indicator, then pressed a finger over his thread. As she lifted her finger, the options appeared. She looked at the bin, wondering if she should simply forget this moment.
A few thoughts flew through her mind, wondering, realising that maybe nothing was too late in her life. She, once again, pressed back and re-opened his thread. Pressing the entry box, she started to type,

‘Hello, you might not have me as a contact any more, but I've had a new phone and I thought that I’d say hello. It’s the girl that spilt the shake down your shirt. Hope you’re okay x’

She pressed send and smiled. She knew that you had to take your chances within the world, as you never truly knew how many you had left. He might now be married, finally finding someone that would hold his honesty close to them, realising what they had. She put the box contents away, being extra tidy, as the phone beeped. Her heart skipped just a little, hoping that it was him.

She pressed the text icon, then the newly arrived message. Her eyes read the words, as her heart nearly stopped and emotions cried.

‘Hello. I’m afraid that Danny passed away a year ago. This is his Stepmother. I do recall Dan mentioning you a few times. He was very sad that it didn't work out between the two of you. I hope you’re okay. Take care.’

She placed the phone onto the desk in front of her, not quite knowing what to do, or think. He was truthfully such an amazing guy, that one in a million, but on the day that he’d asked for that third date, that one more chance, she simply did not send that text.