Placing the coffee cup onto the kitchen table, she feels. The emotion, the stress, finally allowing herself a few moments to break down. Moving the chair, she sits, placing a hand onto her forehead, relishing this moment that allows the tears to appear. Whispering to herself, telling herself that everything will be okay, she knows that she cannot possibly stop. 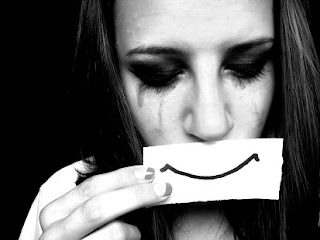 Life, her life, belongs to the daily grind and repetition. Clean, cook, dress the small monsters, all while juggling every second to find a breathing space. There are seldom breaks within her life. No fancy holidays, no realistic escape, but that didn't bear thinking about. Despite the stress, these moments, she loved them with all of her very heart, soul and mind. It would be unthinkable to be anywhere, for long, without them.

She feared for their future, living in the present world, or however it would change when they first started their own journey into the wild. She knew that there would come a time when they’d no longer seek her advice, despite hardly listening to what she said now, she relished the moments of laughter, smiles, hugs and more.

A tear fell onto the floor, her mind instantly reminding her that it needed to be cleaned, each and every single day. She’d ask them to help but they’d probably make more mess, while having so much fun, that she’d have to clean it again anyway. No fortune, no dream, would forsake the moments that they’d shared. She knew that she wanted more for them, much more, but her hands could only do what they did. They at least had this rented space, a place to call home, a sanctuary for the daily madness to be contained.

She brushed her eyes, taking a quick sip of the coffee, wondering how she survived. She simply did what she did, the only thing she’d known for the longest of times. Alone, surrounded by love, the contradiction staring her in the face each day of the week. All she’d ever wanted, when all of the other dreams were carefully folded and placed into the drawers of her mind, was a family. A neat, tidy, crazy, fun filled and love-based family. The two becoming three, then four and, heaven forbid, maybe even five. The ideals taught from all of the silver screened films of her youth, suddenly no longer being a realistic endeavour.

They’d failed her, she’d failed herself, replacing each of them with a carbon copy while hoping for a different outcome. Was it them, was it us, was it just the fate of things to be? She didn't know. But that was okay, it was accepted, while she continued with the day despite wanting another adult to share her thoughts with, fall asleep upon a shoulder and, for once, one of them to stay for more than a week.

She wore all of the hats imaginable. The nurse, the doctor, the psychiatrist, the problem solver, the maths expert and, of course, the Mother. She’d often imagine being that young girl again, the freedom she never knew she had, all looking into her joy filled eyes from the Barbie dolls of the world. Maybe she’d pick action man, the one with the moveable eyes and, at that point, he’d actually be the man that he said he would be.

Taking a further sip from the coffee cup, enjoying the taste as it warmed her soul, she smiled. She did, indeed, wear a thousand caps, had a hundred differing names, as well as smiling at least ten times a day at the daft things they’d get up to. She regretted nothing, would never feel that way, no matter which tear embraced her emotions on whatever day she felt the need. This was her gang, the best gang, with a special invitation for only the best.

Leaning back into the chair, she closed her eyes, listening to their thundering feet run along the corridor. They were on their way. She, again, smiled and opened her eyes to look down at the coffee. She was a woman, a Mother, which meant that within her sat the souls of a thousand different women. Together, working as one, she knew that she could accomplish anything and that thought, that realisation, filled her with the strength of a thousand smiles.