Frank stood upon the step, waiting, hands firmly in his thick jacket pockets as they attempted to hold onto warmth. It had been almost twenty years since he last stood upon the same steps. A lifetime ago, or two, since those eventual days of his younger years. 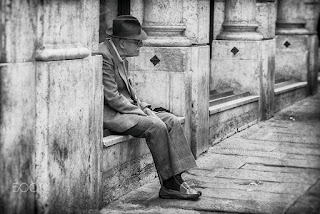 He started to chew the inside of his lip, that thing he did when understandably nervous. Twenty years was a long time, despite never really losing touch with the one person he’d never managed to forget. He was, if he were honest, someone that just wanted to have that little bit of fun. The romance, the excitement, the never-ending adventures and the obvious visits to yet another stranger’s abode.

The small amount of inner lip chewing continued as he looked down the small, cobbled path, left, then right, as his heart’s rhythm continued to beat within his chest. He wasn’t getting any younger, even if his thoughts were still as they were all those years previous.

He’d grown, adapted, strived to be wherever he wished to be, with only one aspect of his life seemingly vacant. That beating heart of his, often silent, with occasionally reminders to consider the emotional needs over the physical. He’d finally given in, relinquished his barriers and finally abandoned the fake walls that kept him within solitary confinement.

He heard footsteps, as he looked to his right. She had arrived. His smile grew, his heart beat faster and the butterflies within his stomach flew with excitement. She was, after many, many years, still the magic that made his eyes show the softer side of his feelings. She could melt any walls, with inly a few of her individual, clever words.

She returned his smile, her face lighting his world within a few seconds. She slowed, standing in front of him, as he stepped down from the step he was stood upon. Removing his hands from his jacket, he placed them into her gloved hands and leaned forward, kissing her lips quickly. The first hello they’d shared in many, many years.

She rolled her eyes, expecting nothing less than his usual charm,

Frank shook his head, knowing not to fight any woman’s description of their hair. He shrugged his shoulders, as he let go of one of her hands, turning to face the steps. He looked back, “Shall we?”

She nodded, as Frank led them forward into the Gardens. As they walked the short distance, he could feel his heart dancing within his chest. He felt 24 again, alive, the joy and appreciation for such a feeling overcoming any thoughts of being anywhere else. They both stopped, by the fountain, the place they’d visited all of those years previous.

He, once again, placed his other hand to hers, their eyes presenting all the truths that could ever be written concerning a love of the ages. They both knew, had experienced the many complexities that life presented, that there was only a finite amount of people that truly, honestly, bonded.

“I’ve missed you so much and I am sorry. I’m sorry that it took over twenty years for us to be here again. I never forgot you. Never would, and that’s why we’re here. We both know that this is where we first kissed and now, it can be the next ‘first place’ that we kiss. Missed you. Absolutely always will, despite my obvious aloof nature. I’m not perfect and I never will be, but we both know that we’re more than perfect together. We just had to see a few others in between!”

Frank smiled a naughty smile, the both of them knowing that they both had differing ways of expressing themselves. She could have said a million words but, instead, she simply closed the small distance between them, hugging him and holding him close. Tears appeared within Franks eyes and, finally, he said the words that he should have said many, many years previous,

“I’ve missed you so much and I will always, always love you!”

No matter the distance, no matter the circumstances they both knew, that there could always be the hope of a second chance.