Huang opened the door, just a little, worried about who was standing on the other side. The person nodded, as he raised the four-litre box. Huang’s eyebrows raised, the jubilation and surprise simply written across his entire face. He’d waited five months for this very moment and, right now, he wasted no time as he flung open the door. He nodded twice, taking the box from the delivery person who, immediately, walked away from the him. 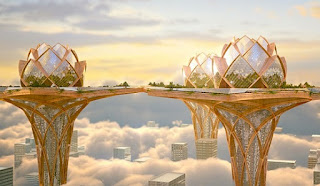 The door closed behind him, as Huang ran into his front room. The surprise, still obvious to anyone within close distance, despite Huang being home alone. He giggled like a child, as he darted from the room, to root through his kitchen cupboards for a suitable container.

All at once, he found a baking tray with raised edges. Realising that he’d found the near ideal item, he placed it onto the floor and stepped onto the tray. His feet fit and that, to Huang, was absolutely perfect.

He scooped up the tray, from the floor, running back into his front room. Slowing, he realised that he needed to place himself into the present moment. He needed to relax, to become a reflection of his inner self. He placed the tray onto the floor, just in front of the large window. As he stepped over the tray, approaching the window, he looked out and down upon the earth before him. The ground, scorched many, many years previously, the planet more of less deceased in all but the word.

He glanced across at the rows of other houses, all perfectly positioned in a line, with the raised foot ways and paths suspended as far above from the surface as possible. He, along with the other millions of people, lived within the space of air. The surface, the ground, all but gone and unliveable.

He’d feel sad, but this is what he’d known all his life. Suspended, floating, trying to reach the remaining sunshine to keep all of them alive.

His breathing slowed, as he found his calm, his sanity and resolve. Turning, he walked over to the box. Carefully, he removed the tape and, with equal care, tipped some of the contents into the baking tray. Levelling off the surface, his hand suddenly stopped, feeling the texture of the particles underneath his hand. They used to call the substance earth, soil, the brown, life giving mud once added to water.

He'd never felt something so wonderful, so delicate, despite the substance being so easy to move with his hand. He snapped out of his wonder, standing, moving his frame behind the tray as he faced the window.

He slowed his breathing, as described upon the old scriptures of soul efficiency. Apparently, he had to reach such a relaxed state that even the world ending would hardly even make a sound to his ears, unless, of course, he was listening for the moment to take place.

Breathing in, holding, then exhaling, he stepped forward. His bare feet touched the earth. Pressing down ever so slightly, moving his feet ever so gradually, side to side, he rooted himself to the earth and started the process.

Instinctively, his focus turned to his feet but, as he knew, he realistically had no idea what he was doing. He’d realised, from the very second he’d read the words, that something wasn’t quite right and, even all the way up in the sky, all he wanted for his life was to somehow become rooted. Today, of all days, he would accomplish that wish, despite the cost, the trouble and, above all, the fact that earth was outlawed.  Today, was the day he’d finally started his journey to becoming grounded.