Noah, hesitant, reflecting on the last few months as his mind persisted with the insistent torture, closed the door behind him. He hadn’t stepped into this very room for many, many moments. It had, as he’d reminded himself far too often, been far too long. He’d taken each day as a solitary section of time to move forward with his life. He couldn’t grasp or, even, wish to contemplate an entire month, let alone a week. 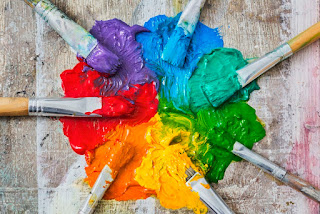 His creativity, his lust and desire to create, had grown stagnant as new flurries entered and departed his life. He’d regretted his decisions, his actions and, now that he was returning to what he loved, his choice to place his own satiations to the back of his mind had haunted him. Slowly, he walked over to the easel, removing the dust sheet from around the blank canvas in one swift action. He paused, holding the moment within his mind’s eye. He’d been here many, many times before but, this time, it was different. He still felt and, if he were honest, he’d probably never be able to relinquish his emotive moments.

He placed a hand onto the canvas' surface, feeling, as he closed his eyes, understanding, connecting to his inner child that loved to create. He’d chastised himself, over and over again, for allowing that inner child of his to ruin yet another perfectly crafted frame of life. As the thoughts arose, he disallowed his thinking to ruin yet another day. He refused. Instead, he felt the cotton duck surface of the canvas, 12oz primed, the most common canvas when looking to place a toe back into the sands of the painter’s mind.

He stepped back a small step, opening his eyes, nodding as the acceptance of having a life re-entered his soul. He’d paid the price, understood the cost, repented and sought professional assistance and calmed that unruly child of his. He knew that he’d been abandoned on many, many occasions and that alone, was why his imagination flared like the surface of a bright sun. He adored creating. He enjoyed the smiles of another enjoying his work, which in turn brightened and fired his soul to new levels.

He'd forgotten. He’d forgotten who he was, what he loved, what he adored more than anything, with the very thought of creating a masterpiece whilst the rain poured upon his face, enthralling his very soul to the level of a burning sun. His very core needed this moment.

He sought no validation from another, he wished for no understanding but the very notion that he’d studied his own soul. He would remain quiet, with his art defining and sculpting his very mood with a hopeful brush. He needed to find his frequency, his poetic position, to place a new platform underneath his feet to rise to another level. He needed to find his vulnerability. He wished to understand his own inner voice, that was attached to the youngest of wounded warriors within. He needed authenticity. He gaspingly needed to find his self-esteem again, after having every single shred of his dignity smashed to small pieces.

He felt his hands start to shake, his breathing quickening, as his mind started to spin. He steadied his poise, grasping, holding, balancing his dignity and self-protection as he steadied his breathing. Slowly in through the nose, out through the mouth. He knew that he’d been broken but, as with the other occasions, what was broken would eventually find and heal the cracks with heavier understanding and balance. Pushing his thoughts away, refusing to allow them into his structure, he continued.

He selected a small brush, watercolour, moving it through his fingers like a skilled magician using a wand to envision magic. He needed to change the frame, his frame, his very foundation of thinking, with a new picture that refined, defined and reminded him of who and what he would soon become. He, as he knew, was also a picture. He realised that every single line, every detail, revealed a new view for anyone that cared to look. He knew that a picture simply wasn’t a picture, it was an expression, a design, a work of thought, a small slice of soul and a dash of heart. It was everything to someone, yet nothing to another. One person would realise the faulted masterpiece within their arms, while another would throw it aside as trash to a bin.

He felt his emotional walls break again, for a second, allowing the moment to hold him in place. He leaned forward, grabbing the top sides of the frame with either hand and, as he felt his eyes reach their limit, a single tear escaped and fell to the canvas. He watched as it fell, the slow motion of a single droplet holding him in place as the world slowed. Every tear, a moment. Ever sob, a chance to escape the pain. Every single expression, a second to become something new.

The tear, absorbed by the canvas, stopped his emotions as he again stepped back. His mind raced, his mind stopped, it explored and realised all within a second. He selected another brush and gently, expertly, drew a faint black outline around the drying tear. His mind exploded with expressive thoughts.

Black, the ascending night of darkness, the realisation and shock of events permeating into one’s soul. He’d been there, lived through the moment again and again, wishing for each new time to become easier. This last time was heart-breaking, distressing, but made him seek solace and clarification from within. He’d started to rescue himself from his tears.

Selecting another brush, he drew a thicker surrounding colour around the black. The purple, ever so slightly blending into the black. The bruises of life, the hard knocks being felt within, the heart cracking and bleeding out its very life essence, from the single solitary tear.

Once again, another brush, the dark blue for the inner-sadness and desolate heartache. The searching, the wandering and wondering, if there would be rescue or a respite to the moments that clouded each sky. Another brush, the colour of orange. Still tender, still hurting, still fresh upon the mind’s eye and thoughts. He’d chastised his thinking upon many a day, but the thinking from each thought, hounded and haunted his very heart.

The green, the grass, the positioning of a person upon the ground, finally able to stand upon the earth after the colours of surrender and failure started to fade. He knew that he was close to this colour, but still so far. The final colour, the bright blue skies of freedom and accepted solitude.

He stepped away from the canvas, a few paces, to view his simplistic, expressive, hastily crafted creation.  It was minimalistic, simplistic, basic but so very, very clarifying to his soul. At the centre of all suffering, a tear. Within the middle of each breaking heart, a drop of pain. He risked a smile, feeling his lips move, as new tears appeared to his eyes. He’d missed this, his escape, his isolation of creation. He’d never dreamed that his first creation would define the ending of a relationship, with such ease. He felt the colours, all of them, upon the nights, within the mornings and throughout each pain filled day. This was his frame, his heart, made clear. It was time to move forward.

Placing the final brush to the side of the canvas, he dried his eyes with his sleeve, lifting his phone from his pocket to take a small, private, intimate picture of his very soul’s creation. It was deeply personal, the first step of acceptance, of creation, to find what was missing. He’d done what he’d intended to do, find himself, heal the youngster within, with the only action remaining being to cry the single, solitary, private last tear.