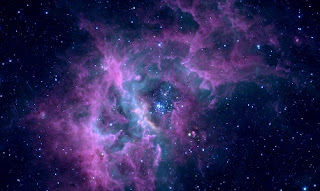 The Nebula, now filling the entire void in front of them, displayed the intense colours that one would never think existed within space. Their time, their moments, filled with intense views that most could only dream of. Jaden relaxed the throttle a little, returning to a gentle coasting speed, as he admitted that he’d lost the race. Again. It didn't matter as, with all things, it was taking part that counted.

With a smile across his face, the Nebula filling his eyes, he watched as his Sister flew to the far left of his destination. A spectacle such as this in front of them took time to map and, between them, they’d be here for at least four hours. Drifting slightly to his right he pressed the button that, once again, released the drones. The tiny crafts flying away at speed, mapping, monitoring, sensing any changes since the last time they’d been here.

Relaxing into the seat, wondering when, or if, he’d ever get a chance to try the Corsair class space vessels, he grumbled to himself. The Viper was an amazing bundle of technology, adaptive, responsive, able to withstand immense climbs and spins, but the Corsair, let alone the Valkyrie class, was where it all started to get very, very serious. Combat, albeit no longer required, was what they’d both trained for. Youngsters with responsibility above their chosen task.

He knew that space should be dangerous, could be dangerous, as no matter what they’d discovered, there had to be more out here than they realistically knew. He moved the thoughts out of his mind, choosing, instead, to simply enjoy the view. The radio crackled once again, “Brother, grid D70, the drones cannot analyse. Having a look!”
“Okay, stay safe.”

The answer arrived from his lips but, straight away, the feeling of seriousness arrived. In all of their time out here, the many, many months, nothing had triggered the drones before this very moment. He glanced across, to his left, the glass instantly magnifying his view to where his Sister’s craft rested. He could see her pressing specific buttons. She looked relaxed, enjoying her work but, at that very second, he noticed a slight change within the space in front of her. It was a space mollusc. Not immediately dangerous, but large, very, very large and on a normal day not hidden.

He screamed into the radio but it was too late. These creatures rested for months, fading into the background of space like some type of chameleon. There wouldn't normally be an issue, as he’d just thought, but she was far too close. It phased into view, tentacles smashing into her craft, ripping it into sections and ejecting her into space, unconscious. The pure, raw, coldness of space.

A second escaped him, frightened, a momentary lapse of fear infecting him. The second moved into the next and he snapped out of the fear, taking control again. Thoughts ravaging, thumping his mind into action, discovering the options in front of him. “Craft,” he shouted, “Voice control!” The craft responded with a beep. “Expand craft to two seats!”  The craft started to expand to allow two pilots, as he pressed the small concealed button that enveloped him within his suit, to protect him from space. “Eject!”

Within a second he was outside, the craft sealing again. He focused across to his Sister, his Heads Up Display calculating her speed and drift. “Craft, enable Near Sight. Go!” He kept his eyes on his Sister, each calculation as important as the next. The craft below changed, moved into the square that he’d seen many, many times, then, within another second, blipped from one destination to another.

All he could do was watch as the craft appeared around his Sister. This had never been tested, let alone thought of, before this very second. He had no choice, no other rescue and, truthfully, he was absolutely scared out of his mind. The life monitors appeared on his H.U.D, with a sigh of relief escaping, as his Sister was safely inside. He barked another command as his focus continued to concentrate, “Life support!” He could see the readings and he hoped, he truly hoped, that she had the second to expel the oxygen from her lungs. If she did she’d have a chance. The small thrusters, built into his suit, engaged and the slow crawl, towards his ship, began.

Looking to his left he viewed the mollusc move away. He didn't blame the creature as instinct was instinct, but he did wish that they could detect them instead of the fumbling they often did. From this point forward, no matter the instance, the drones would always, always, inspect cases such as these.

Nearing his craft, that had now fully exited ‘Near Sight’, he grasped the rear, placing a foot onto a wing, enabling the magnetic shoe lining. Swinging around to the front he looked inside, half expecting his heart to explode, his nerves literally being beaten. Instead, as his tears started to escape, a smile appeared across his face as he caught sight of his Sister, safe and recovering, also smiling.

“Hey Brother,” she said with a broken, exhausted voice, “Thanks for the assist!”
“You do that again and… I’ll save you again.”

She’d laugh, he knew she would, if she could. Instead he would now sit here, outside, once again enjoying the view and uncertainty of space as she healed. He has his family with him, in his heart and, above all, he knew that they’d do absolutely anything to protect each other. Life was beautiful, despite existing often being arduous, but no matter the second, the time, the moment, they had each other and that was the most precious thing within the world. He laughed at the thought and corrected himself, “within the universe!”

“Happy Birthday to me!” he whispered to the great void.