We've all heard and seen that character of immense power, the pants over the trousers, the flying faster than a bullet superhero. He’s strong, fast, quite intelligent and, at the same time, has a fallible heart that simply wants to care. It's his ultimate weakness. Not the kryptonite, not magic, it's his heart that can destroy him. 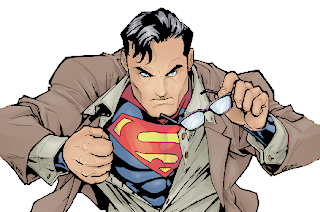 Although leaping a building in a single bound, could be seen to be very impressive, in the real world such things are not possible. A mere man, of flesh and crushable bone, is nothing even close to the super man above. Maybe. Possibly. Who knows.

Men are born kicking, screaming, moaning about the lack of a remote control by their bed and more. We’re ever so cute, saying a few words, thus starts the journey to mandom (Not actually a word).  We’re full of bravado (Another word could be used), beating of chests, with words such as ‘brah (We wish)’, ‘dude’, ‘mate’ and all the other words involved with men being men. Banter.

Then, suddenly, we realise that life isn't just about dudes, women’s bits, having a beer, fighting with bears, wing men, silly dance music (Boom, boom, boom ohhh yeeaaah) and other ‘man’ things. It’s far more. We’re suddenly thrust (don’t be rude) into the real world. With nappies, late nights, early mornings, the tears, the tenderness, the arguments, the love making, the ever-changing landscape of young minds and far, far further than we might currently know.

Life arrives for all of us. Men, at some point, do need to grow (‘up?’), to shape themselves into a new person. Responsibility is a beautiful thing. Rewarding. That responsibility, of course, also involves accepting that we can make mistakes. It happens. Oh, it happens. A man making a mistake? Never, ever. Can’t happen. No way. I deny such things. I jest. One of the earliest, as well as biggest, things to come to terms with is admitting that you’re wrong. You can fail. You can make mistakes. The admittance, the difficult part, is accepting and then apologising. Even when it might not be all your fault.

Say it isn't so? It is, sorry, I apologise, but it is. Me personally? My fault is being far too caring. (Don’t laugh). It’s not a flaw. It’s perfectly natural to have a good heart. I say good but often, when thinking about it, it’s really a very stupid heart. It never learns, it hardly ever adapts, then goes blindly rushing in. Not at all times, as I can be selfish (Oh no, really?).

I suppose that’s what being human is about. Admit the weaknesses, construct for them, resolve for them, adapt where you can, improve and apologise to people as well as yourself. Men are not perfect (Stop laughing) but we’re now living in a world where men don’t really know what they’re supposed to be. I'm from the years long gone so my values are engrained within me. Be kind, be charming, care, use kind words, never attack, resolve, compromise and love. That doesn't make me soft, as I can and will stand up for what I believe in. All of my decisions are based on what I know which means, when compromising, that compromise depends on the situation, what I understand, and the details explained to me. That’s the important part. Listening to another person’s point of view. It can make all the difference.

One of the biggest failures of men, of man, at times myself, is that we don’t listen. When it’s time to listen I really, really do listen. I have to listen. You must listen to the opinion and thoughts of the people that you care about. It’s vital, critical, the tools required for that operation that can heal or harm.

Anyway, ranting done, it’s time to conclude in some random fashion that wraps everything up nicely. Oh the joy of writing where you attempt to get the/a point across.

Although I know that I cannot run that fast, or leap a mighty building, or bend iron bars with my small finger, I realise that I'm never going to be a superman. Never, ever, not even once. But then I step away from that thought. I compromise, I rationalise my thoughts, digest further information and conclude. Superman’s greatest weakness is his heart. He is, however, proud of such a thing. Everyone knows his weakness, his enemies aware, his friends, his loved ones and more. Even his dog knows. He’s never going to change. The writers will never change that.

So, to finally conclude. I share something with Superman, which all men should share and that weakness, which is also his greatest actual strength, is his fallible, stupid, gigantic, ego-less, beating, breaking and loveable heart.

In such things, I might even hint, that I'm a Superman (Stop laughing).