She pressed herself against him, knowing, smiling, letting her mind simply give in to whatever happened next. She felt his soft lips, his rough hair, touch her neck. This, here, ensured that she wouldn't spend this night alone. 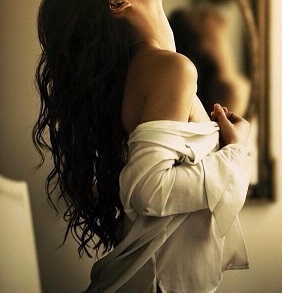 For far too long she’d resisted, held herself back, denying what her mind simply asked for. It wouldn't take much, maybe a phone call, a quick message, or even a smile, as she knew the power that she held within her world. She was attractive, but not in a conventional fashion. She wouldn't place herself onto the cover of a magazine but, with the usual hair arrangement and smile, there were the possibilities of conquering the whole damn world.

Her thoughts raged through her mind, questioning her actions, trying to deny her the freedom that she’d craved. She didn't care, really, when all was said, kissed and done. For far too long she’d sat there, day after day, night after long senseless night, tossing and turning within that cold bed of hers. No more. Not tonight. Not for this moment.

She felt his lips move from her neck, heading straight for her gloriously presented breasts. All the tricks, all the essentials, just where she knew they’d have the most impact. Men, the simplicity of such beasts, defeated by the smallest moments of heavenly presentation. She was, after all, a woman. Strong, defiant, clever, a Mother of the world, whilst also being the ever-present contradiction of pain, sorrow, loss and self-doubt. She would conquer that world, she truly would, if her thoughts would give her that chance.

She’d woken, the many hours previous, staring at the ceiling wondering about why and what she was about to do. She knew exactly what she needed. Whom to call, who to call, with a small list of possibilities. In her world it was a difficult moment of questions and needs. There were men, many men, with many designations and purposes. There were the pretty ones, often vacant, but with their purpose of making her feel inadequate at times. There were the intelligent ones, with their ever present over thinking, that annoyed her while enticing her own thoughts. There were the ones that tried ever so hard and held a heart of golden affection, but for once, just for once, she’d prefer a balance.

She wanted a man that looked at her in a way, that way, that fired her entire body into a confusion of wanton desire, her very pulse racing until taken, a love maker, a taker of her body, with the morning being greeted with warmth, kisses, breakfast in bed and then more of what happened the night before. She needed his every word to inspire her, to lift her, to side with her in the ever struggle of battling the damn world at large.

But that wasn't important, right now. This person, holding her, with fingers that seemed to flow over her with such ease that her body couldn't help but respond, seemed to be heading in the right direction. He had a naughty smile, eyes that pulled her towards him, with lips that simply made her mind race with the filthiest thoughts imaginable. She hoped, she truly desired, that he put those damn lips to good use.

He’d said the right things, considered her words, replied with sensibility and sensitivity that seemed alien to her and, most of all, he’d been respectable even when being ever so slightly naughty. She could tell that he had a mind of pure imagination, that type of imagination, the thoughts that she needed to be alongside her in life. She replayed his words within her mind, a few times, over and over, but it wasn't just the words, as it was the way he’d said them that broke her will.

He’d lent forward, still respecting boundaries, but pushing his luck just that little bit more, saying the words, ‘I know that we've only just met, plus I don’t even know your name, but I don’t want to be alone tonight, or the next night, or the next, which is the truth. If you’ll have me, I’d like nothing more than to have you… all, night, long.’  Words, to her, were just that. But the way he’d spoken to her, the way he’d looked at every inch of her body, with those searching, longing eyes, meant that her defences fell away. She’d laugh, if his lips weren't currently doing something so enthralling, as this was what she’d wanted for the longest time. Someone to hold her, someone to touch her mind, to entice her, to make her feel wanted and desired. Every other part of her life, satisfied, sedated, serene, accomplished, with but one area aching and alone.

He stopped kissing, returning to face her, his longing gaze and beautiful eyes staring into her very soul. Heart pacing, pounding against her chest, she easily threw caution to the wind and ripped open his shirt, pushing him onto the bed. This was for her, letting go, the freedom returning to her body, her desire finally able to express itself, glad that she’d made this simple, solitary, easy decision.