Standing over in the corner, hiding, waiting, he could feel his heart bounce within his chest.  This was real, happening, finally about to come true. He didn't care about the answer, he didn't wonder if she’d accept him, or not, as the only moment he wanted to express was his deepest, honest, intentions. The connection, that second, no matter what happened next. 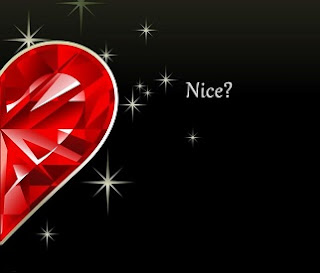 He knew that this was a special day, a day of secret intentions becoming real, within the ever-moving world as well as day. That one day, the honest day, of his words being written onto a page. He’d listened to his friends, all stating what they would buy, what they would do, all forgetting that this day was for secret moments and words. It wasn't for them, to do with them, as this was the Valentine’s moment, the moment of admitting your secret affection for another.

He could feel his hands, shaking ever so slightly, the nerves getting the better of him while his young heart continued to do what it did. This was the first time he’d done something like this, the innocence obviously written across his young smile, his soft gaze, the lips that had not yet kissed, or been given to another.

For a second, he felt the fear appear within his heart, the words mocking him, complaining, stating that his worth would probably not be appreciated by another. He wanted to believe, he needed to believe, that even for the briefest second, he’d see her smile for the words written from within his soul.

He wasn't a word-smith, he wasn't an angel descending from the heavens with words of beauty and worth, as he was simply… himself. Humble. Solitary. An individual within his own world, with the world, thankfully, letting him keep his nature for as long as it would allow.

Biting his lip, he reminded himself that a chewed lower lip didn't look attractive, so he stopped as soon as he’d started. He glanced across to the lift, as the doors opened. She walked into the room, surrounded by colleagues, as well as a few other people that he didn't know. He moved backwards, banging the back of his head against the wall, cursing his nerves. This was it. The moment had arrived.

He watched as she approached her desk, placing her bag aside as she pressed the button on her computer, only to glance at the items he’d left on her desk. She took a second look, realising what was in front of her. He continued to watch as her beautiful face turned a shade of red. He adored the way she wore her hair, the fact that her colour co-ordination sat at a crazy level, when compared to others, with her voice and the words she spoke being music to his ears.

Above all, when all was said, done, the card opened and read, he simply enjoyed her company and never, ever, wanted to damage that. He only wished for her to feel wanted, liked, appreciated for being her own self. She’d been single for the longest time, due to no fault of her own, with the usual men doing what they did to no avail. He knew that they should really be together but, other than their friends stating as much, he wanted things to happen in their own time. In their own way. Fate, after all, could be a friend of many or ignore all hearts.

She picked up the card, slowly opening the envelope, savouring each moment as she felt her own hands feel the heightened emotion. She’d had a couple of cards, over the years, but none of them quite as nice as the one within her hands. She smiled. She smiled a deep smile that reached inside of her heart as she knew, she damn well knew, who this was from. She’d wanted him to ask her for the longest time and often wondered, in silence and while alone, why she wouldn't actually do the same.

It was obvious. The way they stood together, the small moments of silence as they caught each other’s gaze, the smiles, the looks between them, the way he complimented her at the right times, in the right way. All blatantly obvious, innocent and young.

She opened the card, to read the words within.

I've know you for the longest of times, the shortest of moments,
with each day around you being the richest of treasures.
I would never wish to be without you in my life, around my heart,
as you have the most precious smile.
All I ask, even if it is only for today, is that I solemnly wish for you,
just you, to be my Valentine’s on this very day.
Love, ?
XxxX

He watched, as she placed a hand over her mouth, the words obviously meaning more than he could ever know. He moved from where he stood, walking across the room, heading in her direction. He mustered a smile, fighting the nerves, with his thoughts holding onto the fact that she wouldn't know that it was from him. The certainty, at least, meant that he could walk instead of falling over into an emotional heap.

After all the years, the moments, he’d finally done what he should have done. He felt a moment of pride, as well as fear, as he neared. She looked up, placing the card onto the desk and held his gaze. He felt his heart bounce as he noticed her looking at him. As he neared, she moved from behind her desk and walked towards him. She knew that it was from him, she just knew. His words, the thought behind the card and present, could only be written by his heart and intentions.

As they stopped, just in front of each other, his lips parted to speak and in that second, that very moment, she leaned forward and kissed him. The people within the room exploded, cheering, clapping, with every single person knowing that they should have been together for the longest time. The emotion, the feeling, all there in that very kiss.