Little Jess, sitting on the plush carpet, flicked through the super hero comics. Chewing the side of her lower lip, concentrating, musing, completely thinking about the mighty task that she’d been given. So much choice, so many opportunities and so many differing characters to choose from, it all seemed to be a bit too much. 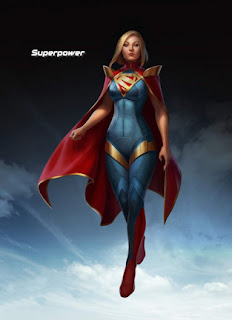 She knew she could do it, pick that super power, to change the way the world thought and featured within her tiny little life. Her parents, behind her, calmly waiting for her reply. They were simply happy to watch Jess at work. Each page, full of colours, adventure, the silly bad guys seldom winning in the world that she existed within. One character caught her eye, the invisible man, with opportunities to sneak into the kitchen at any time. That seemed like a sensible choice. She could do almost anything, within reason, but then she realised that it might not be the best choice. Her mouth opened, realising that if she were to be stuck in the invisible state, how would she be able to hug people? That, for her, was enough to turn the page.

Another hero appeared, the Woman of Wonder, the lasso of truth, speed, strength, the mighty woman of the world. She could do this. She could be the strong daily woman, then when needed, she’d transform into a beacon of magic. Thinking, looking out of the window, it all seemed to be a great choice. Maybe even the only choice. The page turned, reading the words, looking at the pictures, realising that to change outfit she’d have to spin and spin and spin. The last time she did that she was nearly sick which meant, again, that the Wonder Woman simply wouldn't be for her.

The Super Man emerged, wearing his tights on the outside of his pants, which made her giggle a little. The Man of bats? Too scary for her. The Man Spider? Still too scary and, besides, she didn't like those nasty creepy spiders with their eight legs and four hundred eyes. She liked the idea of speed. The chance to be in a place within the blink of an eye. She quickly flicked the page as she reminded herself of what Mother usually said to Father, “I'm not late, as it’s fashionable to never arrive on time!”

She could bend metal, fight fire with fire, control minds, ride a magical unicorn towards the moon and stars. She could stretch, like plasticine, turn green and smash, or even wear a magical suit of armour that fired cool ‘pew pew’ weapons and more. It all seemed so silly. The choice. The options. Her mind still wondering and wandering.  She smiled to herself, confident, that she wouldn't really need a suit of magic or a wand of wonder. She had the toys, she had the magical moments each and every single morning as she awoke to see a smile. A kiss upon her forehead, a hand held, she didn't wish for much within her tiny world.

Standing, she jumped up and span around to face her parents, ready to answer the question of questions. Each day, a new brain teasing question confronted her, with today being particularly demanding. She enjoyed the interaction, feeling cared for, without even knowing that she felt this way. Her smile beamed brighter than any laser beam, stronger than any man of muscle, while her smarts equalled the Man of Bats. She wasn't Sherlock, she wasn't quite the Mystery Machine, but she knew, that each and every single day, she was the butterfly. Growing. Becoming more.

“What super power would you like?” her Father asked while side glancing to Mother. Standing upon her tippy toes, hands behind her back, swaying side to side, she kept her mouth firmly closed as she looked at the ceiling,
“Ummmm?”

Finally, no longer able to keep it to herself, she started to speak, “I would like to run really, really fast. Reaaallyyyy fast. I’d like to leap a building in a single bound. I don’t want to be invisible as that could be lonely. But what I’d reaaalllyy like, is for my Super power to be…” Both parents waited the few seconds, very interested in what the little Miss would say and, finally, Jess answered.

“I’d like my super power to be my heart. As it gets sad. So it has to be big and strong.”