With the weight of the world, upon her weary shoulders, she carried on walking forward. Solemn, lost, her desecrated vessel crying for solace and a serene haven to save her sorrowful soul. She was broken, stripped of her strength, unable to continue in the world where she existed as a flickering, baseless, roaming flame. She’d scream, she’d open her lungs to allow the saving air into her body, but that, that very saviour, was not for her. 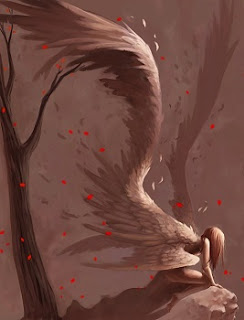 Falling from heaven, stepping from safety into the unknown, she was the wide-eyed innocent soul that adored adventure. She’d fought harder than any other individual she knew, the spirited wanderer that rode into the wind as fast as possible. No fear, no reservations, the ideals and issues of others being nothing to her. She did feel, she knew that she did, but to allow such moments were the true signs of weakness. Above all, especially to peers, she excelled at every task that she saw fit to fashion into her life. She, alone, singular, could never enrage a travesty within her life. Planned, focused, even when the next day featured nothing but thoughts, it was a day of planned notions.

Then, on that day, she decided to escape the safety of her nobility. Falling, cascading, enveloping a new life of wonder and decadence. At first, she strived, broke new ground, survived with ease, looking to the stars, the heavens, to remind her of where she had escaped from. The warmth of the stars, the beauty of the moon, the ideals of her heart, all ensuring that she survived.

The years moved through her life, washing over her, tainting her, introducing her to the life of a normal being. Troubled, full of anxiety, the struggle of holding everything together, she anchored herself to the world with children. Her heart sang, her soul full of joy, the small hands of fate holding to her like three strong hearts occupying the same space. She glowed, she excelled, she decided to undertake a task so very delicate that even the Gods would turn their back on such a moment.

She cut her wings. Removed them. Wrenched them from her back with a vengeful motivation that defied all prayers and purpose. She was a Mother, she was the modern-day Viking that would never, ever, allow any soul, being or moment to command any part of her life. She stood, proud, holding onto one of her long-forgotten wings, bloodied, damaged beyond reprieve. Stubborn, majestic, the freedom bestowed upon her, liberating.

Her life continued, her heart breaking, lost within the world, at moments of great sadness and grief. The two small hearts grew, cultivated by her strength and desire for a better life. They knew, they really knew, that the heart that looked over them, would end before anything happened. The endless emotion of the one that loved. Hidden, until needed. Shrouded, until given.

She outlived them all. Her heart breaking again and again, the fallen Angel, the moments of her past lives haunting her, hurting her soul, chipping away at her very core and life. Each step, now heavy, another moment of loss within her soul. She looked to the heavens, crying, pleading, asking for respite, knowing that the answer would never arrive. Cast aside, forgotten, heralded as the one that would bring dishonour to the higher levels. Her anguish, pouring from within her eyes, she screamed using every second of power within her body. It pierced the sky, cracked through the clouds, moved through the void and finally arrived to heaven.

They looked upon her, despondent, seeing their Sister fall to such a level and place. They wanted to help, they would help, but she had lived the life of the Fallen. The gift bestowed freely given away. She wanted to scream again, to truly let them feel her wrath, but that simply wouldn’t do. It was not the fact that she had destroyed her wings, as she’d flown so many times without them. It was not the moments that she missed, when flying through the same clouds she now looked upon. It was the shear pain and agony of life. Each person, every single person, wished for wings to take them to another place, another moment, but instead, we were all destined to walk upon the Earth without them. She damned all of them, above, she cursed each of their names, as not one told her of the struggle. The struggle of being a Mother. The one that felt her heart break a thousand times yet, still ensuring it all stayed hidden behind a smile. For such beings, for such mortals, there was no such thing as... ‘wings’.