Alder, finally satisfied that the children around him had settled, started the story, “Once upon a time, there existed,” he paused, taking David’s finger from his nose, “there existed children who didn’t pick their nose!”

He cleared his throat and started again. 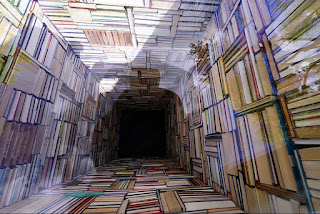 “Once upon a time, there existed moments of magic, self-miracles and inner peace!”

The children gazed at Alder, adoring his stories of the olden days. Alder, knowing very well that they did, also enjoyed the minutes and seconds just as much. He, of course, had specific and special access to the libraries of old, the place that was found by his four friends all the years previous to this very day. Within a crumpled building, behind a heavy door, existed books of wealth, wonder and knowledge.

Upon the finding day, the five of them, his friends, had declared that they would never, as long as they lived, share the location of the place of wonderment. Now, all of the years later, he’d decided to finally speak about his readings. He knew so much, about the way things used to be, before technology re-wrote the entire world. The days of magic, all but vanished, save for the five of them. Five, that is, until three passed into the heaven of ones and zeros.

The children, eager to hear and learn, continued to listen.

“There were men made of peace and tranquillity, women of wonder and steadfastness, people that expressed their gratitude to one another and, upon a given day, meditated!”

“What’s meditated?” asked one of the children the moment Alder had barely but finished speaking.

Alder smiled, knowing that this subjected would stay with them for many, many years.

“To mediate, allows a person to find their inner silence. It permits a person to explore the unknown of their inner and, at times, outer energy. It is to find peace and, more importantly, silence the mind to which we are a slave!”

The children giggled, not quite understanding the subject, to which Alder could, however, still see that their interest was high.

“Okay, how about we try something, yes?”

“Close your eyes. No peeking! Breath in through your nose, left or right nostril will do, hold for a second, then breath out through your mouth.”

The children did as requested, excited to try new things. As they expelled, Alder continued.

“Have a think about how that felt. Breath in again but, this time, concentrate on your actions. Your breathing. How do your lips feel, do you feel calm after breathing out?”

The children nodded as they opened their eyes. Alder had known, since visiting the magical book building, that so much had changed over the centuries. Books were banned, replaced with state sanctioned literature. Freedom was removed, replaced with identification bracelets and more, all for the benefit of society, despite each individual no longer being free. He knew that upon a given day, fear, prejudice, division and intolerance were bred within each of them, despite society supposedly becoming more liberated and tolerant. It was a ruse for all of them to look right, while the real secret took place to the left.

Alder, knowing that time was short, especially upon this day of days, kept his remaining words quick and precise.

“Okay children, that’s it for today,” he paused, as the kids tutted and grew expressively disappointed, “but remember what I told you! Don’t repeat what I’ve said here! Magic and self-accountability are no longer allowed and, what do we want to be when we grow up?”

All the children repeated the previously given affirmation in slightly differing tones, “We will become responsible adults when we grow up!”

He knew, he just knew that the eight of them would become the magical tribe once he passed into the heaven that he’d read about. The heaven from the fables, not the new religiously crafted heaven of tyranny and subterfuge.

After all, behind every fable, there was a sprinkling of truth, honesty and magic.