Claudia stepped towards the podium, tapping the microphone, which sent a couple of loud thuds through the docking area. They’d finally completed the journey, all alive, all still abundantly excited for the days ahead. She, obviously, felt absolutely elated that the mission had reached the end without as much as a broken toe. 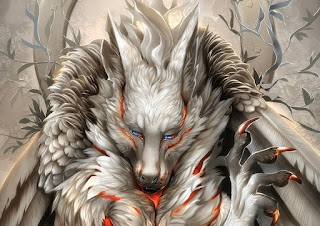 She prepared herself, put on her mask, then started to address the seven thousand people in front of her.

“As you all know, we’re about to land onto RF774, a planet that can support life, allow our race, the human race, an opportunity to colonise and grow beyond Earth. When we finally touch down, in,” she lifted her wrist to look at her watch, “three minutes, RF774 will be known as New Earth!”

She smiled, as the rapture grew within the dock, the cheers warming her soul, the emotions running high with gratitude, excitement and more. She felt blessed and, despite her authoritative nature during the journey, internally commended herself. It was her victory, her triumph, that had brought them here.

As the cheers continued, she glanced to her left side, wondering why Daniel was grunting and making other odd noises. Her face turned to absolute shock, the fear obvious, as she witnessed Daniel changing from man to beast. She watched as his face sprouted hair, his upper teeth elongating over his bottom lip, his back and chest increasing dramatically in size and the fact that he lost most of his clothes.

She slowly moved her head upward, following the growth of the thing in front of her. As she leaned backwards, just a little, the fear still holding her in place, Daniel stepped forward and bit into her face. She’d scream, if she could do so, as the life left her body. Daniel lifted Claudia from the ground, shaking her like a rag doll, before releasing his canine type grip, sending her body flying behind the podium.

Daniel, moving his head side to side, stretching his neck muscles, faced the podium just as Claudia had done a few moments earlier. He cleared his throat, as the low guttural noises echoed through the microphone.

Daniel watched as the entire crew, nearly every passenger, changed in front of his eyes.

“Please feel free to feast upon the human crew, they have it coming… but not Joe, we like Joe!”

Daniel pointed at Joe, who stood near the front of the crowds of changing werewolves, shaking in absolute fear. After a few moments, with a few bloodied and ripped bodies of the human crew lying on the floor, the Wolves chanted their usual wolf chants.

“We,” proclaimed Daniel with strength residing in his voice, “have been ridiculed for too long. Joe knows how we feel, right Joe?” Joe nodded in agreement, fearing for his life if he didn’t do so.

“We’ve lived amongst them, generation after generation, watching the corruption, the greed, the intolerance and the weak bowing down to the oppressive, laughing, ridiculing governments around the world. We had enough. We forged a plan and today, as we touch down upon this new world, we finally have a place to call home. Within weeks, two more ships will arrive with our brethren, and we will be complete!”

Daniel steadied himself ever so slightly, as the ship touched the surface of the new planet.

“Welcome, one and all, to your new home. This is not New Earth, this is our planet and this planet will be called Wolf One. Today, tomorrow and always!”

The room exploded with chants, howling, as they had finally found a place where they were all valued.