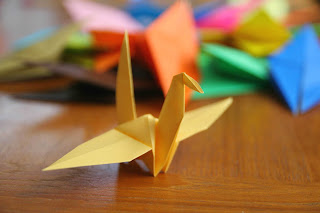 His students, all around the age of sixteen, sat in various poses and slumped situations. They were a good bunch of young adults, despite their infrequent moods or tantrums upon life’s vestiges of days gone by. He’d given each of them a couple of flexi-pages, which could be folded and then, immediately, returned to a flat surface. It could be written upon a thousand times, then every single word removed. A minor miracle of the modern age, especially seeing as trees, more or even less, were practically extinct.

Master Keno had also provided each of them simple, easy, exquisite instructions on how to fold and create themselves a beautifully presented crane. They huffed a little, as they were within the age range that recalled the mobile devices of old. The constant scrolling, the quick fixes, with their attention span measuring moments within the day’s long adventures.

He watched as they folded the paper, trying again and again to perfect their designated shape. He knew that their subconscious mind was ready for wealth, understanding, as their focused mind attached all of its energy to the task at hand.

“Students, continue your work, “ started Master Keno, “but hear my words. Take all of your fears. All of your insecurities. Place them onto the paper that exists within your mind. Create beautiful objects, create something positive from any negatives that you have. Fold the learnings and understandings into new ideals. Create a reason for peace. Fold the meanings into your improved impressions and create a masterpiece of stability within!”

The students, listening to every word from Master Keno’s lips, continued to fold in near silence. It was an amazing sight to behold. The concentration, the ability to focus upon a singular task with constant restrain, would improve their focussing ability in so many ways.

Something so simple, so delicate, as crafting a paper crane, echoed his imaginative thoughts of how the mind tried to fashion solutions. It would tease, taint, twist, fabricate and envision illusions to ensure it gathered what it needed, be it a seductive, charmed thought, or the delight of a day’s plan. He simply wished for his students to relax, form positive thoughts and emotions, from whatever life threw at them.

Since the changes, he’d realised that they needed tasks to perform. They needed structure, guidance, solid leadership, in order for each of them to form bonds and to strive ahead. Master Keno tapped the keyboard again, sending out new tones to embellish their enhanced calm.

One by one, after each other, the students placed their newly created crane constructs onto his desk. He watched as an army of cranes appeared, each with differing colours, sizes, with some looking decidedly unlike the designated crane on the instructions. It mattered not, as attempting the task was, as he knew, better than never trying at all. He smiled, nodding, knowing that each of them required no feedback as the attempt, as his mind had just envisioned, was enough.

He walked to the front of the desk, bowed, then produced another construct. Some students smiled, some gasped, with others showing their comic hesitation, as Master Keno showed them the Origami octopus. Another challenge, for another day. Once again, he bowed, as the clock struck the target time and the students quickly exited the room.

Master Keno walked around the desk, sitting upon the chair, as he started to un-fold each of the cranes ready for the next lesson. Hopefully, expectantly, he wished for each of them to realise that no matter the object or situation in front of them, they could, would and should, visualise the object's situation and, eventually, fold their thoughts into a positive, beautifully presented, solution of Origami origins.