Christopher blinked, the small ice particles floating away as his muscles regained a momentary respite, from the frozen skin regenerating over and over again. It was all but a near constant experience. Regeneration, healing, freezing, over and over again. 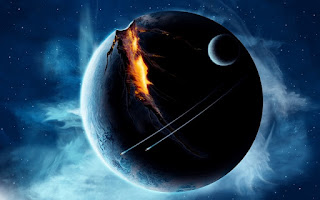 His mind, for the millionth time, regressed to how it had all started. He was forty-seven, at the time, upon a random day to which he could not pinpoint. He’d been working on himself, the transitory turbulence once again threatening to disrupt his calm, but he knew that he’d recover. He’d found a new way, a resolution to resolve his persecution and never ceasing mind. He’d find a path. A new path. A path that required an evolved type of person, calm, reflective, understanding and with increased masculine energy.

He'd enjoyed his years of solitude, the wondering and wandering of a clear mind, but that also brought forward different problems. Life was difficult, life had challenges and, even if his life was perfectly calm, others within that life were not. He was slow, pondering, plodding to make a decision and, for once, he couldn’t realistically blame that upon being a star sign such as a Libra.

He’d found his path and the only way forward would be to clear that same said path. No restrictions, no trauma, no doubts, all issues resolved, finding himself and curing his inner-child of the hesitancy to love without question.  This, above all, was his priority.  Clear the path so someone could walk alongside him. Clear the path for the universe to afford him his wants within the world.

Upon a day, a very distant day, he’d found the energy within. He’d found ‘his’ energy and connected to the source. His mind flicked through a hundred images, all at once, struggling to retain his balance. He could feel his energy field fluctuate, the power within his core resetting once again.

He’d found the universe. He’d found salvation within a world of deities and scriptures and Gods. Somehow, something within, connected. He felt his very body, his vessel, vibrate to a new source of wonder. He’d never felt anything like it before, the energy, the calm and, to which he’d later regret, the life.

He’d shed a tear, if it wouldn’t immediately dry to ice and float away from him. Instead, he continued to reminisce. Twenty years passed, since he’d found the course, the very core of what he could become. He’d wished that he’d transcended and ascended to the realm of pure energy but, instead, he remained rooted to the earth that he called home.

Twenty further years moved through his life until, one day, he realised that he’d not aged a day since the universe touched his soul. Then another twenty. He watched as friends left the mortal realm. He witnessed lovers, the many twin flames, moving towards his embrace only to, eventually, leave his world. He’d grown accustomed to loving with no reserve, embracing with zero hesitation, despite the inevitable ache upon the day they left his side. He’d read a thousand books, trying to explain the aching within, but nothing prepared a soul for such moments.

A hundred years moved through his sight, as he travelled to each corner of the world, that would not let him leave. He was, for a better word, an immortal. The universal energy flowing through him as if he were but a critical cog within the system of love. He found a new appreciation for people, places and the words we’d all use. He taught himself every language, could play all of the instruments he could find, knew two words to calm a heart and three words to clear a soul.

Three hundred years moved along the path of life, his clarity reaching the levels of transcendence and yet, he remained upon the mortal realm. He witnessed the struggles of humanity, the many repeated mistakes of greed and, eventually, the ending of a world.

A day arrived where the human race faced utter destruction. They could have prepared but, instead, they trifled within their own petty fears and doubts. When the day arrived, he stepped forward to offer the words that every soul needed to hear. I was too late. The earth cracked. The earth split. The very planet below his feet, broke in two and died within an instant.

He heard billions of souls scream in pain as they all expired within seconds. He stood upon the dying earth, felt the planet’s impactful soul release its energy to the universe and then, he floated. Gently, slowly, his feet left the earth, his rooted calm finally broken, as he floated into the cold void of space. The immortal, destined to float amongst the very stars, until a new moment changed his entire course of life.

He would have a screamed a million times, if there were an atmosphere to make such a gesture, but there was no such thing within the void. Tired, nearing the realms of utter madness, afforded to him by such a solitary existence, his visions and memories finally offered little respite. He’d had enough and, with one valiant, understanding notion, he called upon every single element of energy within his vessel and, finally, ascended from his mortal realm.

At first, he felt the utter bliss of becoming and, then, the ecstasy of finally leaving his body behind. A new being, a new source of prana, the pure energy of consciousness finally free. The love within him, finally, after an eternity, becoming immortal.